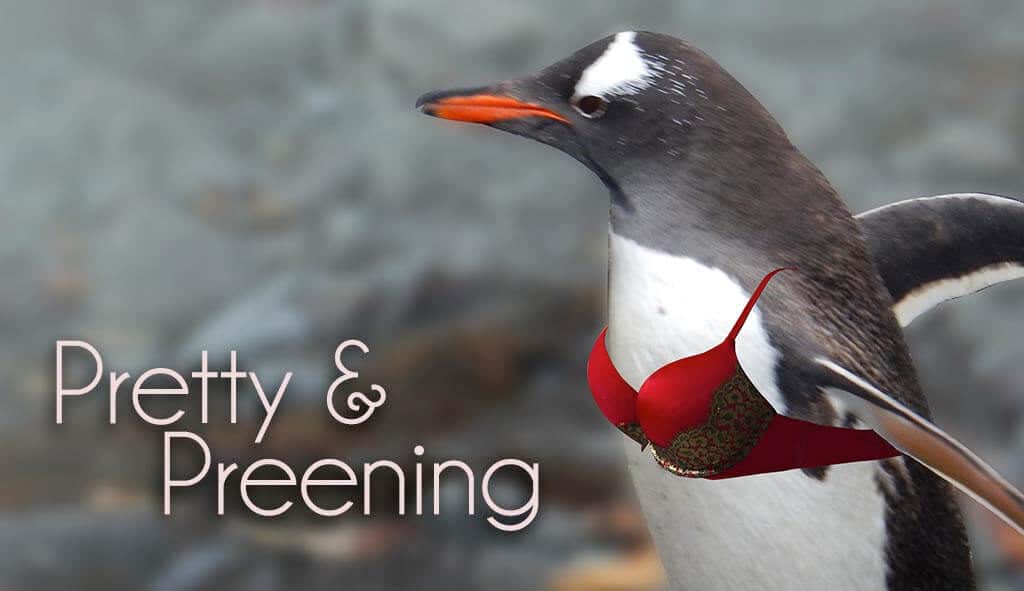 I have been lucky to get to travel and as I go, I have been checking on lingerie habits in each location. I learned some unexpected things about Cuba and Norway, but I think that no one was more surprised than me to find an interesting bra culture in Antarctica. For this edition of Bras around the World, we are going to focus on everyone’s favorite Antarctica residents – penguins. (We can neither confirm nor deny whether the other wildlife wear pretty underthings, they mostly swam away when we tried to talk to them.)

I was able to catch up with a Gentoo colony while on Barrientos Island. Most of the females were hunting for food while the males tended to the chicks, but a few took time out of their busy schedule to chat. When it comes to bras, the Gentoo seemed to be very particular about fit and size, as well as fashion. They spend most of their days regurgitating food into their baby’s mouth and tripping into piles of guano (read: penguin poop), so they want to feel as pretty as possible.

Gentoo penguins rarely have issues with strap size, but constantly worry about band size. Every year, a penguin must molt after the mating season, before they migrate north. The adults wait until their young can fend for themselves and eat as much as possible. While they molt, they must stay still and focus their energy on replacing every single feather. This can take a few weeks! Penguins tend to put on a lot of weight at this time. Sometimes that last hook is not enough. According to a few that I spoke to, a bra band extender can be invaluable. I found a few with Strap Savers, but most Gentoo found them unnecessary.

As I further explored the island, I was happy to come across a colony of Chinstrap penguins as well. Although close relative of the Gentoo, it turns out that they have no use for underwear or coverings of any kind! I found myself in the middle of a community of 2.5ft nudists, eager to strut their stuff.

Although Chinstrap penguins are mostly monogamous, they are also vain. These adorable little guys love to run around and show off everything they’ve got, but they want to look their best. After chatting with their neighbors, the Gentoo, they learned about The Strap Saver and found an unforeseen use – chin-strap saving!  Nothing brings a penguin down more than a drooping face. It is a custom, non-surgical face lift. It also shows a sign of wealth, since Chinstrap penguins do not have adjusters and require the Double Strap Saver Solution to look their best.

More power to the penguins for doing what makes them happy!

While the idea of penguins in bras sounds funny, they are losing their habitat and it is not a laughing matter. Pollution, over fishing and rising ocean temperatures are threatening their homes and their future. To help save the penguins, learn more about them and what you can do to help.   Also, if you can’t get enough of their cuteness (and we can’t!), you can help scientists and grab an eyeful by counting penguins in images on Penguin Watch.

According to a New Study