In June, I had the opportunity to visit one of the few places in the world that experience the midnight sun, Norway. It is an amazing country, known as the land of the fjords, the Vikings and the trolls. (If you’re looking for Frozen reference, you might as well stop reading right now1).  The trolls didn’t impress me, but the fjords and the descendants of the Vikings definitely did. Many Norwegians are quite tall. And blonde. And beautiful. 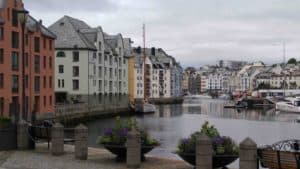 I can’t travel somewhere without taking a peek inside of a lingerie store. We stumbled upon La Belle, a pretty shop on one of the main streets of Ålesund. Once inside, it was quite large and looked like any lingerie boutique that I might find in the United States. It was pretty, feminine and welcoming. They had many of the same brands that we find in our small boutiques: Marie Jo, Freya, Fantasie, Wacoal. There was one German brand that I didn’t recognize but I didn’t take a photo or write down the name. I really wish I had, it was beautiful. (I’m also wary of the staff thinking I’ll see it here and then buy it online!)

The woman behind the counter was very friendly although her English was limited, as is my Norwegian. (I know important words, like iskrem! – ice cream) We managed to communicate and I told her a little about the Strap Saver. I can’t tell if she wasn’t impressed or didn’t understand. (you have your answer to that, I have mine) We were able talk about the bra culture in Norway. 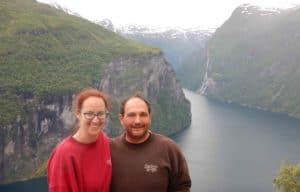 Sightseeing in Geirangerfjord, an hour from Alesund. It was a long day!

She said that fancy bras were popular but that she found that many Norwegian women often wore a size too small. She wasn’t sure why. The saleswoman also said that the customers who came in from other parts of Europe, especially Eastern Europe, understood their size and were able to find what they needed quickly.

When asked the hand-wash vs. washing machine question, she emphatically said hand-wash. I wonder if putting bras the in the washing machine is something only Americans do. Maybe European machines don’t have the “delicate” cycle that we claim works just as well as hand washing (but, doesn’t). Is having a washing machine with enough buttons to launch the space shuttle is also only for Americans? Europeans don’t tend to be as concerned with bells and whistles – and space is at a premium.

I did notice the boutique prices were similar once converted into USD, which surprised me given that the cost of living in Norway is much, much higher. (2 burgers, fries and a soda at a walk-up counter was $25!) I wish I had thought to find a department store or even a discount store, to compare the quality and cost. I was too busy staring at the fjords, eating cheese, and driving on some pretty crazy roads (well, riding and navigating, Marc did the driving). It is hard not to in such an amazing place.  If I’m ever lucky enough to go back, I promise to find more information.

Have you ever been to Norway?  What was your favorite spot?

1Yes, Arendelle is loosely based on Norway but even the 8-year-old girl traveling with us got caught in the beauty and forgot the Disney story – you know, the one where the sister without the magical powers, cool dress, or song is the true hero….

Your Call Is Very Important To Us
Scroll to top